In response to my most recent question, “Who is your favorite female comic book character?”

…This is, unfortunately, the moment I have always feared.  It is time that I finally admit, to myself, God, and/or the Universe that I know next to nothing about comic books.
I understand if you wish to stop reading now, perhaps even delete this bookmark from your registry in outrage.  But believe me, I do have a genuine interest.  It’s just that, between the search for signs of intelligent life in the universe and my continued investigation of the wit and wisdom of the great apes, I’ve had very little time for the diversion, and, as such, I’ve learned virtually everything I know about comic books from the nerds I’ve been kind enough to date.
With that rather humbling confession out of the way, the question at hand has merit, and warrants a great deal of thought.  I shouldn’t simply arbitrarily pick out a few girls from the registry to highlight; that would do a disservice to the industry and the characters.  Instead, I think a more accurate representation of my knowledge should follow as such:

The 10 Female Comic Book Characters That I Can Think Of

A beacon of feminist ideals

1.    Wonder Woman: Originally created as a proxy for William Marsden’s bondage fetish, Wonder Woman is everything from a feminist icon to a colossal freaking joke thanks to the preliminary costumes we’re seeing out of the potential NBC pilot.  I’m going to tune in, though, just in case they forget to edit out one or two of the inevitable nip slips our new costume filler is bound to incur while running.

Confusing my sexuality since 1995.

The way it should have gone down.

3.    Jean Grey: I think the only one on the list that I ever actually empathized with, due to the shared feeling of being slaves to our brains (I always felt she was something of a metaphor for the internal torment that smart women tend to feel), but I’d have ditched Cyclops 10 miles ago if Logan offered me his helmet.

4.    Bat Girl: Commissioner Gordon’s daughter, her existence was introduced at the end of The Dark Knight during Two Face’s fun little hostage situation, and they should just let it go after that because they’re not topping Heath Ledger with anything, I don’t really care how Anne Hathaway looks in vinyl. 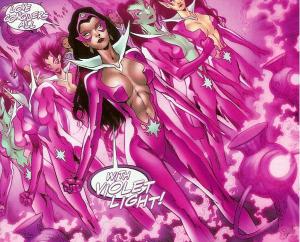 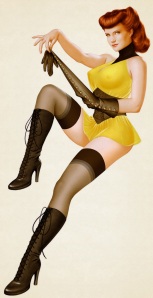 You make me want to cosplay.

6.    Silk Spectre: I went with Sally Jupiter on this one, the pinup was too hard to turn down.  SUPER Fun Fact: I went to see this in the theatre on Stupid-Parents-Take-Their-Young-Children-To-An-Innappropriate-Movie day.  They must have been half price tickets given the sheer number of tiny voices I heard remarking about Dr. Manhattan’s copious appendage.  Good times.

Look at her up there. Dazzling.

7.    Dazzler: An X-Man who apparently does things.  Shiny things.  I’ve heard her name mentioned a lot, so she must have gotten naked or something. Also, hey, roller skates!

I can has Leather Jacket?

8.    Rogue:  The look-but-don’t-touch thing was deliciously frustrating, and she’s a character that makes me interested to actually catch up on the story lines. 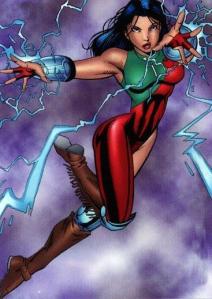 What is it with ethnic girls and weather control?

9.    Rainmaker: Another member of the compelling Gen 13 team, Rainmaker also scores some queer points for being one of the first openly gay superheroes in the trades, which resulted in some pretty hilarious hate mail back in the days just before email and the Internet and spell checkers that recognized the word “lesbian.”

10.    Francine and Katchoo: The one trade on this list that I did read from start to finish.  One cannot separate the two characters from each other or Strangers in Paradise.  It broke my heart in a good way to see the door close on their story.

So there you have it.  I hope this has provided a salient answer to what has been a most interesting question.  And to anyone who can recommend a quick and easy way for one to familiarize themselves with these story lines, I’m all ears.

This makes no sense. I dont know why i did it. I Am X Episode #1, available as a PDF by request.
Stuff is going on.
We’re back in the New Year! The Lost Season - The story of theater that might have been! https://off-the-spectrum.com/2021/02/08/ls-1/?fbclid=IwAR3KS7OyRMO230B3_5kb6sp0a9-AOwARoZY7b665j3ZAL7YytipdFArPUNM #sprungocomix #comics #OffTheSpectrum #Broadway #Theater #humor