Once I stopped typing before, I realized that I could think of 10 more female comic book characters. Below is exactly everything I know about them

Undressing after a long day of business school.

1. She Hulk – I’ve learned about this one late. Somewhere in between the Gorgeous Ladies of Wrestling and the Wicked Witch of the West, we got She Hulk. I don’t know what she is, and I’m not too sure I care. But why is she green all the time, and why is she capable of complete, intelligent conversations while the most we get out of the male equivalent is “Hulk SMASH!” ?

Because a bright yellow cape isn’t going to get anyone’s attention.

2. Jubilee – The yellow-trenchcoated barnacle on Wolverine’s hull reminds me of Batman’s Robin in all the wrong ways – her clothes are a target practice costume and her power draws as much attention as is humanly possible. If I made fireworks, I’d dress in camouflage every day. She might as well have the power that causes her to teleport from one dangerous situation to another equally awkward and dangerous situation. 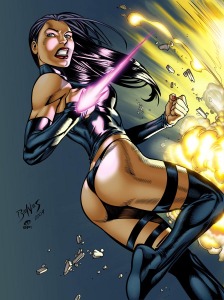 3. Psylocke – Apparently she’s one half of two different ladies, and both of them have weird purple hair and make knives with their hands. This was the super power I wanted – the ability to stab and punch at the same time.

4. Black Widow – Fulfilling the mandatory guns-and-boobs quota the NSA requires of any superhuman crime fighting agency, Black Widow is an agent of SHIELD, and Tony Stark wants one. I think. This is all the knowledge I have. Did Scarlett Johansen come from a comic book?

Having a bad day. Check out her numbers.

5. Cat Woman – International PETA spokeswoman Selena Kyle goes into obvious heat whenever Batman is around. Is she bad? Is she good? Is she going to be able to fit into the latex after she’s had 6 or 7 of Bruce Wayne’s kittens?

I don’t know *why* she was naked in the movie. She was never naked before.

6. Mystique – Hello blue lady. When Magneto left the un-mutated, naked Mystique alone because she wasn’t “one of us anymore,” my brother said it was the gayest that Ian McKellan had ever been. Another one of those that begs the question – if she can look like anyone she wants, why does she look like that?

7. Sue Storm-Richards – Not only does she turn invisible, she makes invisible things that she can use to pretend to do other stuff! They haven’t addressed how she manages to save the world while phasing in and out of the crippling blindness that occurs when your invisible eyes are no longer able to reflect the light that allows you to see.

8. Hawk Girl – Is this a real thing? When I Google it, I feel like the internet is playing a practical joke on me. Apparently she’s a founding member of the Justice League, which gives her as much of a partnership percentage as Superman. Go figure. 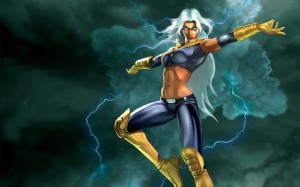 Clouds only fear you if you show them your abs.

9. Storm – Marvel thinks that ethnic girls control the weather. This is probably something dredged out of the “Myths We Learned About Girls Because We Never dated any” Files. Anyway, Orroro Munroe is an Egyptian orphan with weather control powers and now she’s a science teacher. That’s how the world works sometimes.

What does she do? She’s got a sword, I promise!

10. Dawn – She didn’t make it onto my first list and it surprised the heck out of me when I realized I’d forgotten about the most unreasonable of all superheroines, Dawn. I think she’s The Goddess, but I’m not sure. She hangs out with God, the Horned Consort, and Satan, and they all look like the same really aquiline blonde guy, so I’m not sure what the commentary on religion is supposed to be. Also, she’s crying. That’s hot.

There are a lot of girls out there. I’m sure I’ll think of 10 more.